the man with the dragon tattoo 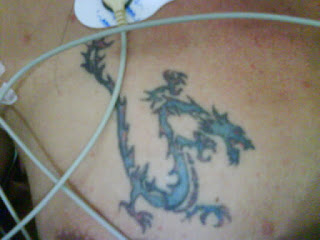 there's this patient at my hospital. male. 42 years old. he's been treated for nearly one month for nonhemorrhagic stroke. he was previously treated at a hospital in cibinong but was transferred to my hospital due to the remote location from his family.

he has several tattoos all over his body. i figured that they were made at an exclusive tattoo parlor, not at some tattoo parlor on the street. they colours are sharp, the lines are clear. in short: his tattoos are beautiful. one of them is a dragon tattoo on his right chest. it caught my attention right the very first time. it has red eyes and claws and greenish body. the dragon covers most of this man's right chest.

he is not married. and so the huge difference between his room and other patients' is that it's mostly quiet. he has no visitors but his younger sister, and sometimes her husband and children. he has no girlfriend, i guess because there has been no woman--other than his sister--ever visited him. his friends? i don't know. probably he has none. or probably they're just too busy with their work. this is the perfect opposite of how communal indonesians are.

when he first came, his condition was quite bad. but since few weeks ago he started to improve. he remains afasia motorik though. a condition where a person cannot utter words but understand them which i strongly guess was affected by the hemorrhaging in his head. his limb are mostly flaccid, again due to the hemorrhaging in his head. he can swallow food better eventhough he can only eat porridge. other than that he is really getting better.

the guy has been sent home a day before my shift, because his condition has improved to a point where we, as doctors treating him, feel he only needs time to recover. and i mean a long long time. although he'll live, he still has to suffer from the paralysis most of his extremities. and so what he needs in this long recovery time is a continous love and support from his closest ones, something that i sense is hard to get. besides, of course, a nurse to help him take his daily needs and medicines.

note: only after he's been sent home that we sort of believe that his dragon tattoo was some kind of good luck charm. because during his hospitalization, the rooms in our hospital was almost full all the time--and made us overwhelmed every shift--and then right after he's gone the occupancy rate fell down to almost 50%.

well, i pray you a speed recovery wherever you are man with the dragon tattoo.