Note: the article was actually written last year, one day after the evacuation.
MUST. WRITE. THIS. DOWN. BEFORE. IT'S. COMPLETELY. OUT. OF. MY. HEAD.
Woke up sunday morning still feeling sleepy when I read the whiteboard outside the kitchen says "Expat Meeting 9.30 am"

It must be because we partied until past midnight last night.

When the inpats came to join the meeting, it became clear that it was not about last night. It must be about security. Something else happened.
Apparently the government troops are advancing towards the north, which we are now. They are on foot. Roughly 20 hours from Lankien. The evacuated staffs. ZBW and OPM are the codes for the flights

And so, the decision has come from HQ that we need to evacuate most of the expats and all of the inpats out of Lankien.


I was so sure that I was going to stay.

The PC announced that 20 inpats and expats will be evacuated that day in two planes. The names will be written out on the whiteboard later on, but for sure all the inpats are going. She asked us to prepare our runaway bags, and then start to discharge patients that are not too sick and can be seen in the OPD the next few days. And so, we were on our way emptying the wards and explaining patients and caretakers that they can go home and go to OPD for follow ups when the PC called us for a second meeting that morning. She has made a list of the people that was going to be evacuated in 2 planes. I was included. My first reaction was surprised that I'm one of the MDs evacuated when I'm actually one of the most seniors MD around. I spoke to the PC about this. I remembered saying,"Really?!" 5 times with each tone higher than the previous one.

Eventually, the PC said,"OK, I'll see what I can do. I'll let you know later."

...and then there were ten. 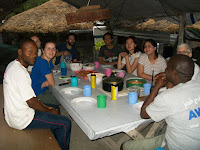 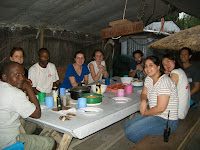 On gloomy Sunday morning, 20 inpats and expats were evacuated from Lankien due to security reasons. The remaining, which is called 'The Skeleton Team', stay in Lankien and continue to provide medical service to the community.

It was tense but exciting. In the evening, we decided to have a sit-down dinner and just tried to enjoy the rest of the weekend. Which we did.

No fightings broke out yet. But it's just a matter of time.

To all friends out there, please wish us safety and security so we can continue our services to the people of South Sudan.