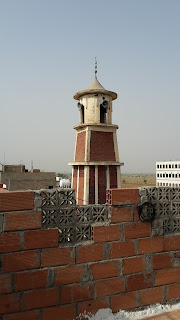 the mosque is just over there!

Jumuah mubarakah is what they say here (at least between men) after offering friday prayer. It's basically saying have a bless friday to the people they meet or even they talk to on the phone.
Being able to offer friday prayer in the mission, for me, is a bless. On my prevous mission in South Sudan, the project was located in the middle of nowhere. I heard adzan few times only, so vague that up to now I still think that I was probably hallucinating because I didn't hear adzan for so long.
And now, here in Yemen, even though I still have to wear my MSF vest when I'm on the street--although the mosque is 20 meters away from the house--I feel so much grateful.
Like most buildings in Yemen, the mosque is a modest square-one-floor building with minaret on one of the corner. On July, the weather was so hot that I sweat just by sitting there listening to the khatib yang sedang berkhutbah. Of course there were few wall and ceiling fans but they don't really make any difference.
Men and boys came with their sunday friday best complete with their jambia (and sometimes with guns well)

One thing that amazed me is that how quiet it was. No voices of people mumbling or chatting, no sounds of children running around and screaming. People, old and young, came to the mosque to offer prayer. And that's what they did. I'm amazed how people listen to the sermon seriously, how school-age children came in 2 or 3, few without adults, offer sunnah prayer and then sit quietly listening to the sermon.