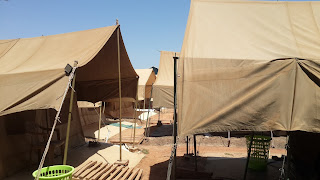 You're currently on a transit in one of the busiest airports in the continent. On your way home after finishing another mission with one of the most prestigious humanitarian organizations in the world. Now the memories of the past few months in the project start to come back. Only after you're out of the project you can see clearly what really went through.

Hot and dusty. First impressions that you got once you landed on that red-clay soil airstrip. You began to think whether you're going to survive the mission or head home early. You arrived in the compound, welcomed by various faces with names and positions that is impossible to remember in one go. Put your bag down in the dining room, grabbed a cup of water and was immediately taken for the tour in the compound. Continued with another tour of the hospital with another person.

There has been questions on your arrival to the project: what exactly you're going to do there; why you don't take on calls; how long will you be there; are you gap filling.

After few days, you started to get more grasp of what was happening there. Why you were sent there in the first place. to put out fire. After that it only became harder. Not only because you were sent there to repair whatever broken but also to change things. It's not easy because you're not an outspoken guy. It's not easy because your English seems to deteriorate after a while. They kept saying that your calmness can help to improve the tense situation in the project. But being calm doesn't necessarily means that you can solve problems. It's not that simple. It takes an excellent interpersonal skills to do that which you think you don't posses.

It got worse when they asked you to take on a new role with the new structure that is supposed to get better control of the people on the project (and the project itself). Of course, you're there already. So it made sense for you to try it instead of getting someone else from outside to come. And then with a dry smile you said yes the offer and shook the hand of the project coordinator. You have actually read the job description before, so you know what kind of hell you were about to enter.

It was a helluva exciting and challenging type of hell. You had more responsibilities but at least it was clear to you and other people in the project what you're expected to pull out.

And it went fast.

And suddenly you're on your last working day in the project but yet still so many things to do.

You left the project with feeling incomplete. Especially because there was no one taking over your position and no one to hand over to.

As you boarded the plane to the capital, you couldn't stop feeling relieved knowing that you'll be home in 2 days. And that just preoccupied your mind until you're here. In this waiting lounge in one of the busiest airports in the continent.

And everything that happened in the last two months just start to sink in.

And now you don't know whether to be happy or worried.
Email Post
Labels: Doctors Without Borders kemanusiaan MSF profesi relationship South Sudan