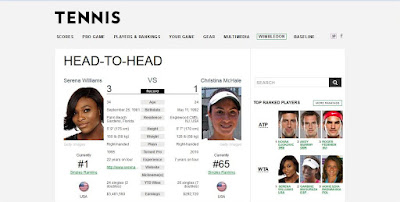 Watching some part of the match between Serena Williams vs Christina McHale in second round of Wimbledon, I can't help thinking how McHale felt at that moment. The tv showed while they were both waiting in a the lounge before entering the court. Serena was wearing her beats headphones while Christina stood slightly behind her. And when they were called, Serena came out first followed by Christina--looking a bit intimidated not only by Serena's fame, experience and achievement but also Serena's muscled physique. Christina who never got more than 3rd round in Wimbledon seemed a bit depressed and definitely under pressure.

Serena, however, with her 17 wimbledon record appearance, has different pressure. She must win over this girl and maintain her dignity and power in the eyes of the international tennis community.

In the end, Serena won the match but Christina put up a pretty good fight.

I don't have a moral of the story thingie about this. I just want to say--and remind myself--that even though you are facing a huge problem in front of you, a big wall that separates you from your goal, all you have to do is deal with it. Face it. Jump over that wall. Climb it. Break it. Whatever the result, in the end, you can tell yourself that you've done what you could do.
Email Post
Labels: gak penting me