[Yemen] Ramadhan Kareem in the Project

It's been more than a week since I've arrived at the project in Yemen. I am assigned in Abs Rural Hospital in Abs District in Hajja Governorate which is in northwest part of Yemen. Before arriving here, people in the capital have warned me of how hot it is in here.

Hot and dry. And dusty. With occasional sand storm in the afternoon. Typical desert weather. 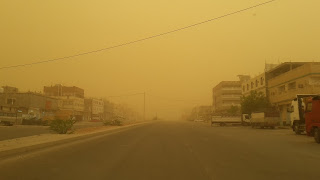 occasional sand storm in the afternoon

And so, besides adapting to the project--how things work, working with expats, working with national staffs, seeing patients at the hospital, speaking arabic or trying to, eating different things here--I have to do fasting in this situation.
Tough.
Especially due to the hot and dry weather where the wind almost doesn't blow and dust everywhere. It's so hot, that during the day, even the local people like to splash water on their face, head and neck.

And so my typical day during ramadhan would be get up around 3 am to do sahuur, offer fajr pray, go back to sleep, get up at 7.30 and go to the office at around 8 am. Doing some paper work and reporting before going to the hospital at around 9.30 am.
At the hospital, I put my bag at the ER, doing rounds with the doctors and nursing supervisor at the ER and observation rooms which can take from 30 minutes to 1 hours depending on how busy it is. At 11 am, continue with doing rounds in surgical ward with the surgeon, nursing supervisor and IPD doctors, then crossing the hospital compound to maternity ward. You know, it´s already hot in the morning, so you can imagine how hot it is going back and forth between wards in the hospital at noon. 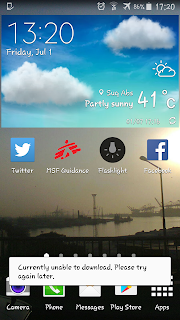 Yes! It is that hot!

At around 1 pm, we usually do rounds in the pediatric ward with nursing supervisor and the doctor and finish around 2-2.30 pm. Then I usually go back to the house to offer dzuhur pray because it´s quite rempong when you´re wearing shoes with the wudhu and everything. Go back to the hospital after offering ashar pray, I stay and supervise the doctors in ER and IPD until around 5 or 6 pm. Sometimes it is so hot and I get so lemes that I go back early or even don´t come back to the hospital after ashar, instead I go to the office to do some paper work.
Being a moslem in a moslem country in the Arabian peninsula, you would guess that it would not be so difficult for me to do my obligations as a moslem here. Well, not quite right. Since, this province is under the occupation of the Houthi which is shiite, I can´t really go out and pray at a mosque before knowing which sect does the mosque belongs to: shiite or sunni. Also, you can´t differentiate whether a person is a shiite or a sunni from their outer appearance, so I can´t really ask someone to offer pray together with me since that person might be a shiite.

Alhamdulillah, there are 2 other person that are fasting as well at the expat house. They are both relocated national staffs. We usually have iftar together continued with dinner with the rest of the expats and sahuur together with the watchmen and the drivers. The menu for iftar is usually shafoot which is pita bread which is soaked in yoghurt that I don't really like. And then there are dates, fresh juices, and of course sambosas. For sahuur usually we have fresh khubz bread with fatta (or is it fahsa?) which is minced meat with onions, okra, potatoes and few other things that I can´t recognize. 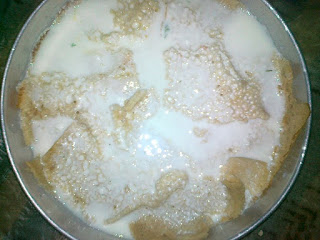 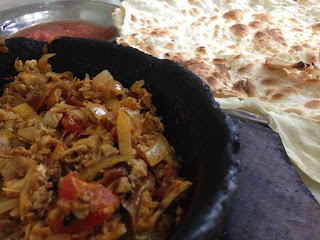 khubz and fatta (i guess) (picture taken from here)

Don't ask me about ngabuburit. Around that time I would still be either at the hospital or at the office. Saving lives or Saving files.