On Running and Sumpah Pemuda 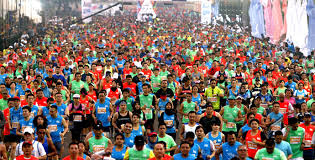 image was taken from here


Head Note: This article was actually written exactly 2 years ago. I thought I had posted it but when I looked up in the history and on the internet and found nothing, I realized that I never posted this article. So, here it is!

As I was in the midst of my exhaustion trying to finish my 5K run, I saw a middle aged Caucasian man who ran lightly as if he was made of cotton candy. I then thought to myself, is it still possible for me, at the tender age of 33, to improve my physical fitness, strength and endurance?
Sport has never been a big part of my life since long time ago, but now I've started to embrace it as a part of healthier lifestyle.
Well, depends on from which point of view you're looking at, but I consider myself still young. Being young means we are less experienced, means that we are allowed--to some extend--to make mistakes, and then learn from those mistakes. But being young does not mean that we are less reliable. We too, can be as reliable as the matured and experienced ones.

Speaking of which, on the commemoration of Sumpah Pemuda, it's time for me to take more part in my life--rather than just go with the flow--and to take more part in making myself useful to others. Of course, I'm not trying to be one of those inspiring young people out there, although the thought of it occasionally runs through my head as I read, watch and see these inspiring, vibrant young people. They are literally everywhere: TV, newspapers, internet, even on sidewalks. Their actions, efforts as young people to be acknowledged and to leave marks in the world inspire me even more. And if they can do it, why can't I? I can give you some example of young people who, in a way, rock my world, ada young philantropist/entrepreneur, even my fellow colleague. I sometimes even felt inspired and motivated just by watching Indonesians cigarette commercials.
Of course, I'm not trying to be as 'huge' as them, I just want to donate and dedicate what I have and what I can do, to the good of other people. Basically, I just want to do the best of what I can do.

And that's why I joined MSF a year ago. *timeflies*
I wanted to be more useful, I wanted to touch other people's lives, I wanted to help others. And in the journey of it, gaining a lot of experiences and friends.

It's time to act.

And I know that it's going to take a lot of efforts and perseverance to do it. But I've conquered the most difficult part of it: starting it. All I need to do now is to keep the momentum goes on.

And hopefully, by this time next year, I'll have improvement on my physical fitness, strength and endurance and that I'll be able to run for a far more distance.

End note: On sunday, I just finished my first ever 10K in 1h15min. Went on my 3rd mission with MSF on June. And still continue to serve the people everywhere.