The Horror of Female Genital Mutilation 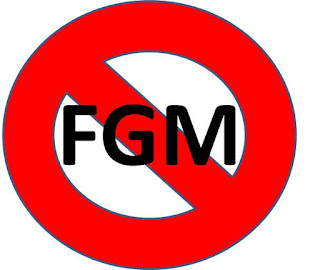 As a medical doctor, I have been exposed to many different diseases and weird medical conditions. I have also seen the catastrophic effect of war and violence to human body, but I have never realized this particular thing exists until I've seen one. This particular thing that I'm talking about is called Female Genital Mutilation (FGM). I have only seen 2 patients, but two patients were too many to realize how barbaric and cruel this particular practice has been.

One afternoon, a woman was brought to our hospital unconscious. We couldn't figure out the reason. We could only get poor history from the relatives. Time was ticking, we needed to do quick action. So we decided to treat as hypovolemic shock despite the unknown cause. To be sure that we are hydrating enough fluid and not overload the patient, we had to insert urinary catheter. As usual, since it was a woman, I asked the female nurse to put it. We cleared out of the room. Then the nurse came to me saying that she couldn't do it. I was confused. I thought at first that she couldn't figure out which hole to put into. She made sure that she knew what she was doing. So then I told her to get the smallest size. She said she couldn't do it. I was thinking what a small urethra this woman has. We then even tried to use the smallest feeding tube. It still failed. I then asked permission to do it by myself.

At first, I was confused. There's something wrong, because this patient had different external genital part compare to the ones I've seen before. It was even quite difficult for me to find the external urethral orifice. Because of this, we sent the patient to the operating theater to have a supra pubic punction to drain the urine from her bladder.

That, after a while I realized that what we had was a case of genital mutilation/genital cutting.

FGM is a tradition that dated back before Islam. It is a common practice in few countries in the Horn of Africa with Somalia being the highest number of women that underwent such procedure. Somalia also has the most extreme form of female genital mutilation.

Female Genital mutilation or female genital cutting consists of the cutting of clitoris, labia minora and majora (the folds of the vulva) and rejoining the cut edges of the labia. This procedure is also called infibulation. So it is very much different from Indonesia's custom of female circumcision.

The result is 2 very small holes: one on the top where the urine passes and the other one is what's left of the vagina which is so small only a pinkie can fit in it. Many women had this procedure as young as 1 year old, so it would give them suffering all through their lives.

This savage tradition has brought pain and infliction in short term and long term. In acute phase, many women developed abscess & infection from the non-sterile procedure. In chronic phase and most probably lifelong suffering, the effect ranges from recurrent urinary tract infection due to modified external urinary tract to death.

It's probably difficult to imagine, but FGM can lead to death. In many cases it is related to childbirth where the process can't go on normally due to extremely small vaginal hole.

The effect is horrifying, there can be prolonged labor which can cause maternal and fetal death. Other than that, strong uterine contraction on a very small hole can lead to uterine rupture which also can cause maternal and fetal death. So, it will not only affect the women but also the babies they carry. In many cases, it also impairs urinary and genital-menstrual function.

For me, after seeing those two patients, this long time tradition is as horrible as the war itself. It does not only violate human rights but also disgrace and dishonor women.

Today, this practice still exists. It's not only government's or aid organization's job to wipe this ancient torture from the earth. It also needs community's role and active participation to uphold women's right to have self determination over their body and their health.