Being able to see some parts of the world in the last three years have really opened up my eyes, widen my horizon and expanded my knowledge. On my last assignment to the middle east--Yemen to be exact--I was exposed to a unique custom which is chewing leaves and part of the stems/stalks of a plant called "Qat" or "Khat". 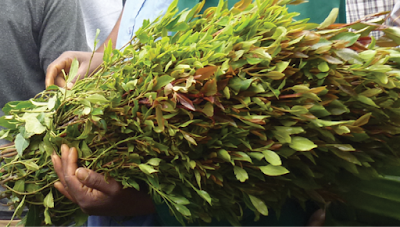 Qat comes from a plant called Catha Edulis which is native to Horn of Africa and Arabian Peninsula. It contains an alkaloid called cathinone which has the same effect as amphetamine and can cause excitement and euphoria. Because of that, qat is illegal and considered a controlled substance in some parts of the world, while in Yemen and Djibouti the consumption is legal.

Qat is a shrub plant so the tree is not very tall and the leaves are brownish and leathery. You can look up the leaves, trees and other information on the link I provided below.

In Yemen, the men above 18 (even probably under 18) start to chew qat in the afternoon after having lunch and can continue up to midnight. It is literally everywhere. The men sit in comfortable position and chew in qat saloon, in restaurant even under the trees with friends and families. They chew and talk and chew and talk until they run out of qat for that day. 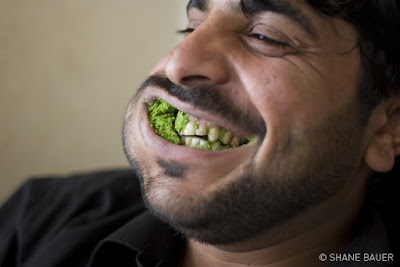 So, how does one chew qat?

- First of all, take the brown-green leaves and put them on one side of your mouth. Then chew them slowly. Don't rush it.

- The leaves that are chewed are the ones on the bud/tip of the stalk, the young leaves.

- Besides the leaf, you can also chew the small stalk that are still green and soft. You can chew them together.

- You don't have to keep chewing. You can stop chewing for a while and just suck the juice that is coming out from the leaves.

- At first, it will taste bitter, but over time, you will feel less bitter and more blant taste.

- They will say don't swallow but one will eventually swallow bit by bit as it becomes very soft and pulverized. After all, you are chewing.

- Gather all the chewed qat to one side of the cheek by pushing it with your tongue. Make sure you put it on the far side/corner of your cheek.

- Apparently it has similar effects to that of Amphetamine. So, one will feel euphoric, excited just as if one takes amphetamine.

- However, the effects can be felt after hours of intensive chewing and sucking. So, don't expect to feel anything in a short time.

- Repeat the process over and over again until one runs out of qat. The chewed qat is not spat unless you think you're finish for the day. But even as the qat runs out, people will continue chewing until I don't know when.

- After few hours you will feel exhausted after constant chewing and then the effects hit you: euphoric, excitement, constipation and insomniac to name a few.

For sure, it's something different, unique and able to bring people (especially men) closer together as what I have seen during my stay in Yemen. But of course, not all people would choose to do it. 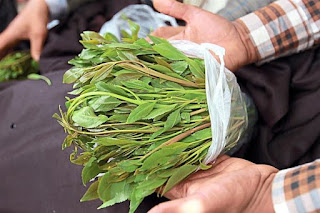 - Khat on https://en.wikipedia.org/wiki/Khat
- Chewing Qat (aka "Getting High") in Yemen on http://www.wanderingearl.com/chewing-qat-with-locals-in-yemen/
- Qat it out! on https://frombrusselstobeirut.com/2010/10/19/qat-it-out/
Email Post
Labels: Yemen