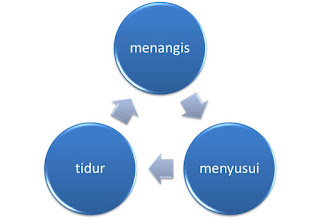 When our baby was born we thought, like any other baby, that he would just act as normal baby would do which is crying and then breastfeeding and then sleeping. The rhythm should just continue on and on. But apparently he's not. Of course there are times when he pees and poos, but moreover there are times when he was just inconsolable. Crying even after breastfeeding (which probably a sign not he was not getting enough milk) and crying when he's going to be put to sleep. Sometimes he cries very hard that the neighbor would be able to hear him. At different times we need to take him out of the house and take him around the neighborhood just to calm him down. And after few hours of what seems to be endless cry, he will be exhausted then stop crying and in the end sleeping. That's when we start to think that may be there's something wrong with him. May be yes. may be not. For us, he is healthy. But of course he can not explain what he feels and what makes him crying. So we will never know for sure.

I then start to think that every single baby is different. Every single child is special. That is why babies don't come with a manual book when they were born. So there's no need to compare them one another because they are just not the same. There's a baby that breastfeeds a lot. There's one that sleeps all day long. Our baby happens to cry too many times.

So instead of comparing them, we should--not only us but other parents and people in general--try hard to raise them well so they can reach their maximum potential. So they can grow as civilized human beings that respect each other and full of compassion towards other living beings.