[South Sudan] Lankien: There and Back Again* 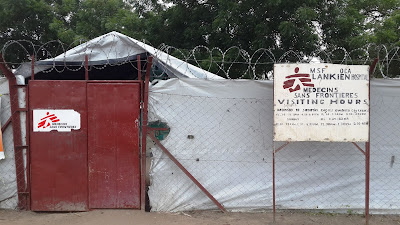 It's the same place but it's not quite the same as it used to be. Not only some of the national staffs changed, the atmosphere had changed as well. The expats that I used to work with, of course, had long gone. Even I'm not doing the same thing that I did before--which was almost everything. Now I'm doing several minor surgical procedure as well. Procedures that are normally done by a surgeon.

My forth mission with MSF, second time to South Sudan, and I was supposed to support the project in the southern part of the country, but the mission needed someone to cover the MD gap in Lankien.

So, I arrived in Lankien with a big smile on my face and a good feeling that I'll have a good time here. I was greeted by the team members and met the 2 MDs in the project, one of them is leaving in a few days whose place I'm going to cover. And then i was then left alone as MD in the project after the other MD left for holiday. I pretty much did everything I could do: OPD-IPD, nutrition department, TB-HIV, Kala Azar department and sometimes I help the maternity department as much as I could and surgical department.

The first day when I was in charge of the surgical department, I did 2 awesome cases: 1 GSW on both thighs and 3rd degree perineal tear. For whatever reason, I actually almost passed out at the operating theater when I was doing debridement on the first procedure but we eventually managed to evacuate many pieces of the broken femur. And then, few hours after that I made an awesome come back on the second case. The next day I started to read primary surgery textbook while still doing other "normal" stuffs. Of course there were times when I felt like it was too much for me to handle, but I kept going and kept pushing through.

Luckily a new MD arrived at the project to replace the MD that I'm covering in. And so, it ended my continuous on-call nights for almost 3 weeks. And then the other MD came from her holiday which means that many responsibilities were taken back to the rightful owner and less work for me.

But it doesn't mean the story stops right there. :)